I think lasagna was one of the first dishes I tried to make myself as a young cook. Growing up, I wasn’t really encouraged to go into the kitchen. I also remember trying to help out by peeling potatoes and slicing into part of my finger. I think I was mildly traumatized and I never thought at that stage that I would love cooking so much. I think I always loved food however, and I did spend quite a lot of time hanging around kitchens. As a teenager in the 80s I think I had limited exposure to different kinds of food except for family restaurants. I remember a fast food restaurant called Milano’s pizza that came in as a competitor to Pizza Hut. I think that was when I fell in love with lasagna – even though I am pretty sure that it was a far cry from what you could get in a more upmarket Italian restaurant. When I got married, I had a Violet Oon cookbook and I remember lasagna was one of the first recipes I tried.

I remember the first experiment was a failure as the lasagna sheets still seemed partly cooked and tough in spots. Subsequent attempts included trying to precook the lasagna sheets which ended in a fiddly mess. Finally I figured it made a difference which brand of lasagna sheets I used and that I had to completely cover the lasagna sheets with wet sauce. Anyway for me, lasagna has always been a work of love as it takes a good amount of time to assemble the dish.

Since going low carb 3 years ago, I had not made lasagna because I thought it would be too difficult to make over this pasta-based dish into a low carb version. However recently after getting my Instant Pot and discovering it could make ricotta with the yoghurt function (oh yes indeedy!) I started thinking of what I could make with the fresh ricotta I could churn out within half an hour. So lasagna was one of the things that came up and I began to think seriously about making it low carb.

There are actually quite a good number of zucchini lasagna recipes out there. But basically I figured the biggest challenge would be to make sure that the zucchini did not turn into a soggy mess. I think this was the most time-consuming part of the recipe, which entailed drying out the strips of zucchini before assembling in th dish. At the end of the day, I think it was well worth it as the zucchini layer held up really well even though the vegetable peeler I had sliced them almost paper thin.

I had also amped up the flavours in the meat sauce as reviews online usually said that the meat component needed to have more herbs or spice to counter the more muted ricotta layer. This is one setting that I usually sneak in (surprisingly) some fish sauce. A really good fish sauce usually adds umami flavour to meat dishes, and most people cannot imagine how Asian fish sauce could figure in an Italian dish. But a first press fish sauce like Red Boat has clean flavours that adds a subtle layer of complexity even in a Western style dish like this.

So here is my version of Zucchini Lasagna – it’s still a dish that needs lots of effort, but it is well worth it. 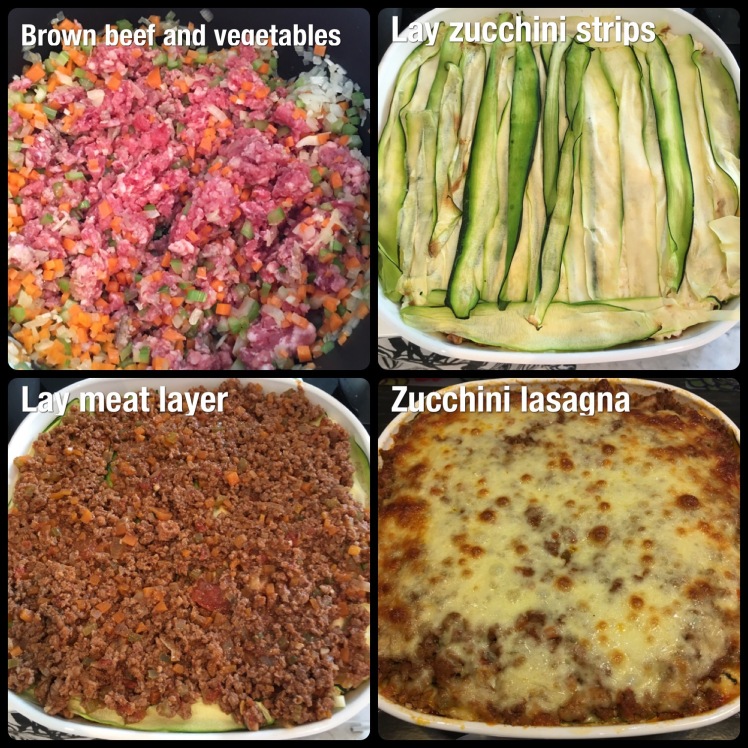