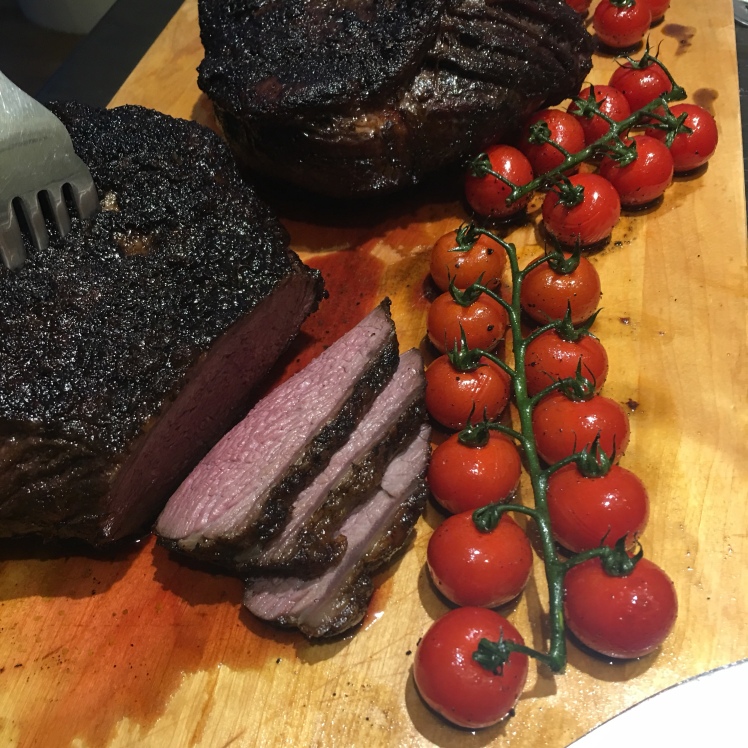 I recently discovered reverse searing. The principles of reverse searing is beautifully explained by J Kenji Lopez-Alt and I completely fell in love with the method of cooking thick cut steaks. This method turns tradition on its head as most thick cuts of meat or roasts are seared first, followed by oven time, but reverse searing results in a piece of meat that has a beautiful crust and also perfectly evenly cooked meat on the inside. Gone is the scary bullseye appearance of raw meat in the center and overcooked meat on the outside.

This method is somewhat akin to sous-vide, although I must say I never fully embraced sous vide as I found the vacuum packing and long cooking times cumbersome. Given my smaller kitchen now with lack of counter space, a sous vide set up would seriously curtail movements in my little cubby hole! Anyway I think sous vide for steaks with my home sous vide circulator is doable, but doing a whole roast is intimidating, which is why the reverse sear method works really well. All you need for a reverse sear is a good meat thermometer and a cast iron pan that is big enough to accommodate the roast.

I first discovered the beauty of picanha beef in churrascarias in Brazil. I probably never ate such great beef in my life prior to that memorable trip. The picanha cut is actually a rump cut with a beautiful cap of fat on one side. Prior to the trip I had always thought that the best cuts of beef would be (to me) the ribeye or the sirloin, but I’ve come to understand the South American love for the rump cut. It is also a relatively cheaper cut of meat and is great for entertaining small to medium-sized groups of people.

Kid#2 is in the midst of her holidays now and in the beautiful hiatus between secondary school and junior college. She has been having a blast of a time, bowling, watching movies and singing karaoke. She is a bunch of friends known as the “chickpea gang” because all of them are pretty short. (By the way whenever kid#2 has accused me of passing on my lack of height to her, I’ve always pointed out that I had done my best and married a tall man, and there is only so much you can do to fight genetics). So kid#2 had requested a dinner at home with her friends. I agreed of course because it is pretty satisfying cooking for squealing and enthusiastic teenagers and I also love the idea of spoiling their palates for life.

So the picanha reverse sear did it. It was a little like food opera to bring out a beautifully crusted beef roast out on a cutting board and gently slice the meat, only to discover perfect even pinkness within. The beef was tender with the right amount of chew to it, and the spice blend lent a kind of spiciness to the crust, and there was no need even for any mustard or horseradish on the side. And kid#2 said that she would love me forever, which probably made this cook all worth it! 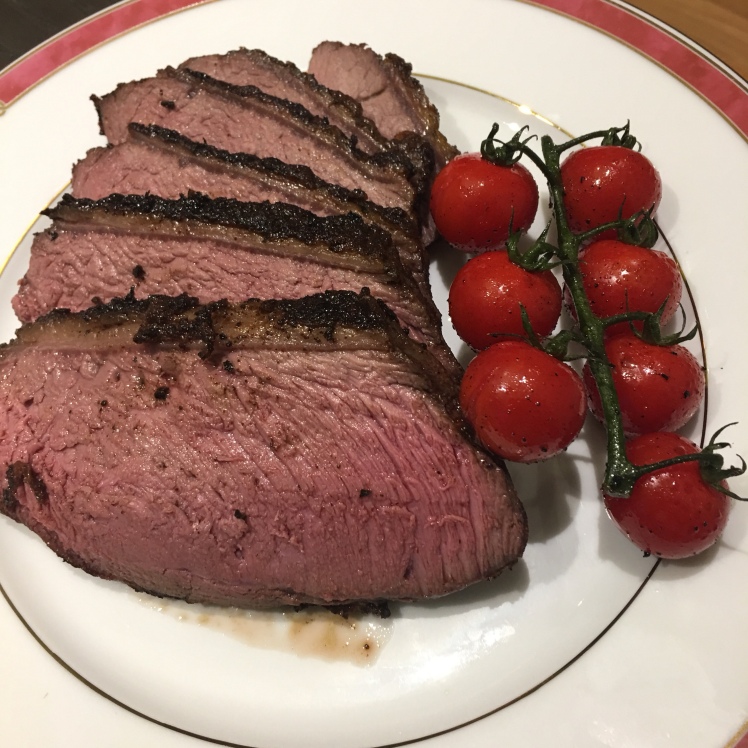 Beautiful even cooking on the cut surface of the beef slices!

(Picanha Beef can be found in Meatmen butcher in Singapore)

You need a great cast iron pan and a leave-in meat thermometer for this.