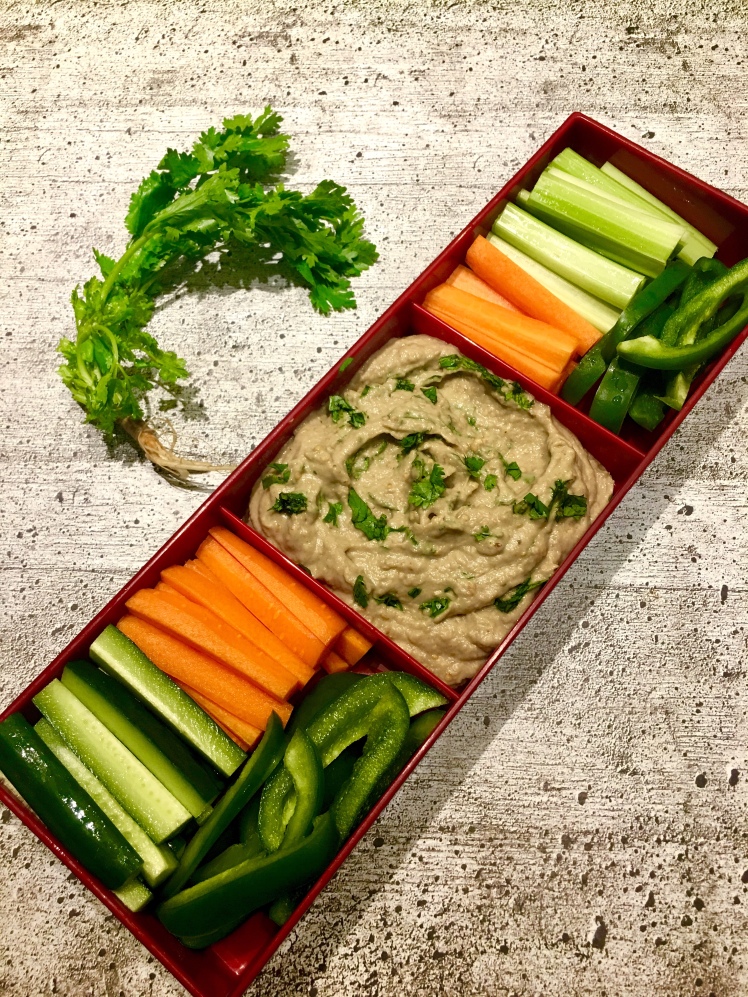 Kid#2 dominated the kitchen this week. She’s been on a one week school break and seems to have taken over my hospitality hat. She had almost 20 teenagers over the other night (my ears are still ringing) and decided she could produce a couple of dishes for them. Apparently my spinach-artichoke dip recipe is a hot favorite among her friends and she single-handedly depleted my precious stash of canned artichokes.

So anyway since I was having cell group over I decided to make some baba ganoush – mainly because I wasn’t in a mood for cheesy heavy dips (2 days of spinach-artichoke dip leftovers in a row is rather daunting). I personally adore eggplant (as much as hubs hates it) and since hubs is away playing golf this was a golden opportunity to have my favourite vegetable dip.

Baba ganoush is a smoky mashed eggplant dip that is pretty middle eastern in origin. The tahini (sesame paste) and lemon combination is characteristic and I personally prefer baba ganoush as it’s lower carb than hummus that is made from chickpeas. The great thing about homemade baba ganoush is that you can adjust the seasoning to what you prefer – I prefer to go a little lighter on the lemon and tahini and allow the silky eggplant pulp flavours shine through.

Traditionally, baba ganoush is made smoky by charring the eggplant over an open flame or roasted in a grill. But being a modern city girl with gadgets I decided to broil the eggplant in my air fryer. My Buffalo air fryer is as well utilized as the Instant Pot in my kitchen but truth to tell, it’s my helper D who makes the most use of it. The Buffalo Air Fryer is one kitchen gadget that I don’t regret getting as it’s spacious enough to accommodate different odd-sized food items and is really easy to clean. I used the turbo mode to do a quick roast of the eggplant and I think the smokiness was good enough for the dip. This is crazily convenient (I cannot imagine rotating an eggplant over a gas stove for an hour) and I lost no sweat over the making of this dip.

Kid#2 turned up her nose at the Baba Ganoush…unfortunately both kids have inherited their father’s eggplant aversion, but the house visitors seemed to like it and my mum was practically licking the container for the dip. I guess this recipe works for eggplant fans only!

Slice the eggplant into 1 inch-thick rounds. Sprinkle about 1-2 tsp salt over the eggplant and place in a colander or a sieve and allow the liquids to drain out for about 15 minutes.

Rinse the eggplant discs and dry with a kitchen towel.

Place the eggplant slices on a rack in the air fryer. Broil for 10 minutes (230 deg C), then turn over and broil for another 10 minutes.

Remove from air fryer and wrap the eggplant up in aluminum foil. Allow it to cool down for another 10-15 minutes.

Strip off the skin of the eggplant. Place the flesh, garlic, lemon juice, tahini, cumin and paprika into a food processor and blend well. Add salt if necessary.

Sprinkle chopped coriander over the baba ganoush. Serve with some crudités.