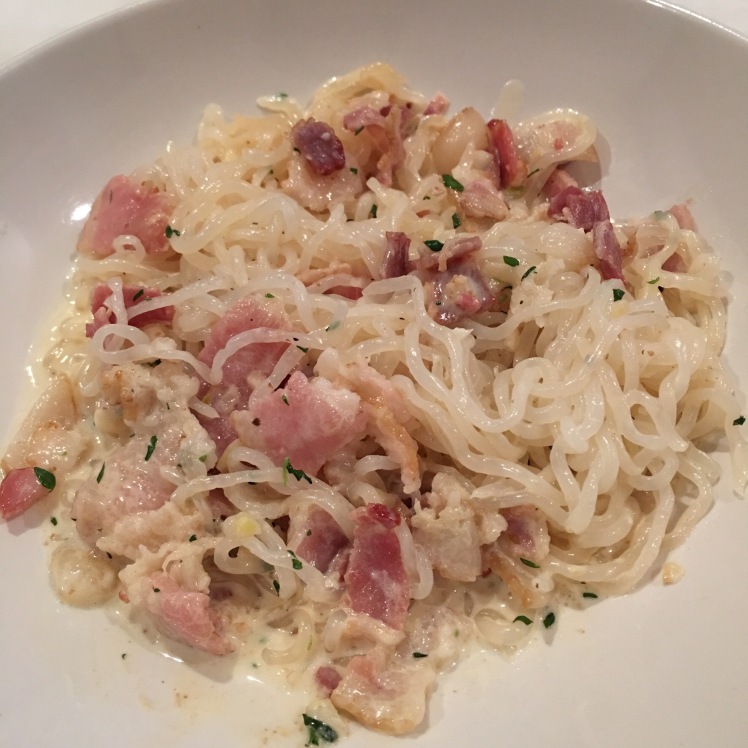 Pigs will fly the day I stop eating bacon. Most people would be familiar by now with the latest World Health Organization recommendation to avoid processed meats because they increase the risk of cancer by 18%. The IARC working group under the WHO therefore put processed meat consumption into the same risk category as smoking. To add insult to injury, red meats were also tarred with almost the same brush, except that there wasn’t enough evidence to make such a strong recommendation for red meat. Of course this spun out into a media frenzy and a heap of bad press. The meat producers in Australia immediately protested vigorously…and I did notice yesterday when I went to Cold Storage that the pre-packaged deli meats were all on sale.

Health advisories are tricky things. And there has been obvious mistakes in the past when saturated fats were vilified in huge campaigns in the 1970s – 1980s, resulting in a whole low fat industry rising but as a result, most people ended up eating more refined sugars and carbohydrates. This flawed interpretation of research that became a dietary dogma probably impelled the current obesity epidemic in most developed countries. Diets low in saturated fat do not decrease the risk of heart disease as evidence has clearly shown now, as most cholesterol taken in the diet does not contribute to circulating cholesterol in the blood, but actually the high carbohydrates that the liver converts into cholesterol. But the dietary dogma about cutting fat intake has stuck and people are fatter and unhealthier than before. Sadly it all started from really poor epidemiology or interpretation of existing studies.

“…the ‘vilification’ of saturated fats dates back to the 1950s when research suggested a link between high dietary saturated fat intake and deaths from heart disease. But the study author drew his conclusions on data from six countries, choosing to ignore the data from a further 16, which did not fit with his hypothesis, and which subsequent analysis of all 22 countries’ data. Nevertheless the research stuck and since the 1970s most public health organisations have advised people to cut down on fat.”

So what do we do now with the hysteria that 2 slices of bacon a day (50g worth) already increases the risk of carcinogenesis and colon cancer? Firstly one has to understand the constraints of epidemiological studies, one of the fundamental questions being whether processed food is the biggest culprit. Other factors such as existing diseases like insulin resistance, obesity, metabolic syndrome and genetic predisposition may also play a role. Furthermore, when the evidence is looked at more closely, the studies did not distinguish the difference between the different kinds of processed meat (most people instinctively know the vast difference between a slice of prosciutto and a slab of spam).

What about red meat? If you take the epidemiologists head on, the actual evidence digested means that cutting your current meat intake to the lowest level only decreases your risk for cancer by 3%.
“That population attributable risk (PAR) calculation of 3% is telling, along with the relatively modest effect sizes… 20 to 40% increase, comparing ~8 times increase in intake. The PAR means that on the assumption that this exposure is causal, removing the exposure to lowest levels will only reduce the incidence of disease by a negligible 3%….” Dr Simon Thornley, public health epidemiologist.

The same study (European EPIC data) that formed the base of the IARC working group’s recommendation also found that vegetarians had a high rate of colorectal cancer than non- vegetarians. Which probably means that we can have our meat and eat it too. 😁

So what do we actually conclude? The truth is that I do try to avoid processed food already, but there are a couple of non-negotiables for me, such as prosciutto and bacon. As a family we do love beef, and it is probably a treat once a week or fortnight. Chicken and fish (and rarely pork) are the meats we usually eat. I remember reading a long time ago that one should only buy food from the margins of a typical supermarket, which, if you haven’t noticed, are actually the aisles with fresh produce and meats. The mantra is to cook fresh and eat fresh as much as possible. Initially when I started on the low carb diet, I would almost weep when walking into the supermarket because, in case you haven’t noticed it yet, 85% of food sold in supermarkets is actually processed and high in carbohydrates (and corn syrup and palm sugar fillers, not to mention a bunch of unpronounceable chemicals). I felt so deprived then until I discovered how much better it is to just cook with fresh and healthy ingredients.  But it does take effort and determination. So I have tried to talk the kids out of their sausages and deli meats, but there is no denying how convenient it is actually to throw a slice of ham on toast and send them off to school. And bacon. For me, bacon is the one thing I am holding on to while kicking and screaming. How can one not survive with bacon?

Yesterday I had been having a bit of a bad tummy thanks to some serious overindulgence the previous night and I could not really eat dinner. But by supper time my wobbly tummy had started to growl and I wanted something comforting and warm. So I whipped up this quick 10 minute Shirataki noodle pasta with bacon and white sauce. Now I will point out that I did use just 2 slices of bacon (just skirting IARC injunction about 50g processed meat a day). For those who have actually been reading my blog about Shirataki noodles in the past, you would remember me stating that Shirataki noodles is not a good substitute for pasta and is better seen as a Chinese or Japanese noodle as it is rather tasteless and chewy. Well I kind of take that back, because when I flavor-loaded the pasta sauce, the Shirataki noodles were actually pretty darn good. A definite comfort food winner on a lazy Saturday night in.

2 thoughts on “In Defence of Bacon”