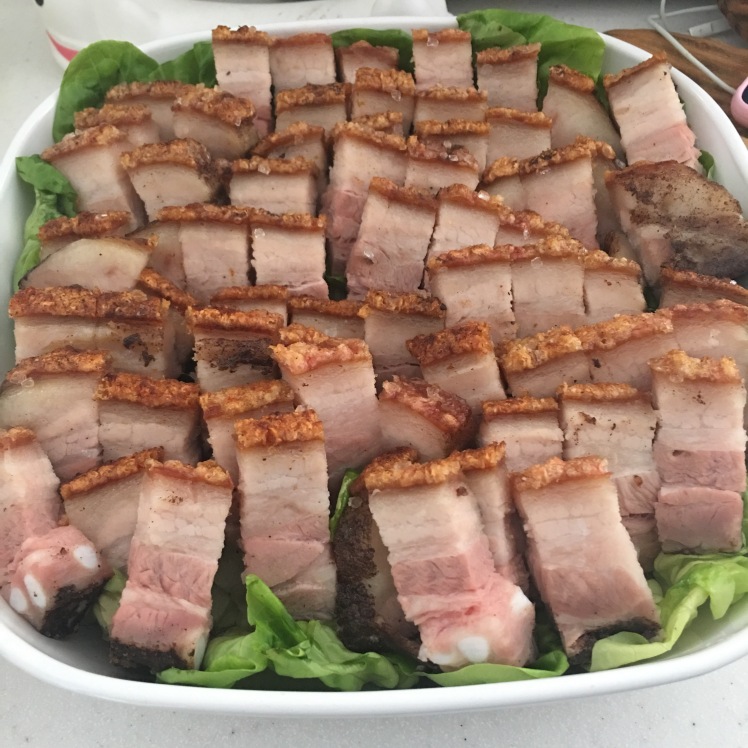 Ok a disclaimer first. The original recipe for sous vide sio bak (Chinese roast pork) came from the Food Canon’s blog. This already awesome recipe is actually good to go, but I figured that I needed a truly fool proof tweak for a perfectly crispy crackling. The quest for the ultimate roast pork belly is a study of contrasts – soft and melt-in-the-mouth meat and crunchy and puffy skin.

Because hubs is not a pork fan, it is really only at Chinese New Year that I make this dish. So the improved versions have been at a glacial pace of transformation (literally year on year) but now I think I’m happy with the results. And the fact that my non-pork eating husband actually ate and praised this dish was testimony indeed.

The other important key is to get really good pork belly – this is the reason why I brave the crowds at Ghim Moh Market before Chinese New Year. The pork belly there must come from young pigs because the fat layer is thin and the meat tender and juicy. Pork belly in the market runs out really fast and any housewife worth her salt knows that you would have to line up from 6 am in the morning as the large slabs of pork belly are gone by 7 am. I was responsible for chagrin and silent gnashing of teeth of the ladies behind me in the queue when I bought the last large slab of pork belly for the day I was there. There was, I confess, a great sense of satisfaction, similar, I suspect, to what a prehistoric huntress would have felt.

To be honest, this dish does take some work but it is well worth it. This dish calls for serious love 😍.