I’m really feeling rather chuffed. Someone passed us 2 National Day Parade tickets for tomorrow (woot!). Grateful to hubs and kid#1 for giving me and kid #2 the chance to go – I’ve never been for an NDP before and to get to go for the 50th parade is really a great opportunity. Am looking forward to the fireworks!

There is really a lot of hype now about Singapore and how great a place it is to live in; at the same time I do hear people pointing out the current day challenges of increased crowding and decreased integration of foreign workers and new immigrants. Truth to tell (although I often forget it), I am actually an immigrant as my family moved to Singapore in the 1970s. I was a couple of months old only, which is why all my memories are that of growing up Singaporean. I had the benefits of good schools and open opportunities. I can honestly say that I have had the chance to go places and work with great people. I am sure this would not have been possible if my family had stayed put where they were before.

This is why I can think in English and dream in Singlish (cannot meh?), eat in Michelin starred restaurants and still love my hawker centers, talk to ministers and the cleaner auntie or uncle without batting an eyelid. I’ve grown up in this egalitarian hodge-podge society, naively thinking that the world is pretty much similar to this when it actually isn’t. We occasionally have Obama and the ISIS to remind us otherwise.

But I think I grew up in a simpler Singapore. I come from a generation fed by campaigns (the various courtesy, productivity, keep clean and save water campaigns were our staple). For all it’s worth, I think most of my generation would take the trouble to throw away our own litter – unlike what you see now where Singaporeans have gotten used to an army of cleaners mopping up after them. We were taught to be values-driven and to pursue and take pride in our nationhood. Which has become rather unfashionable in this present day.

We now live in a uber-modern city. I grew up living next to pigs and orchid farms (and I really mean next to – I used to spend many afternoons gazing at a rotund mud-swilling pig just next door). We cycled up and down our narrow street and knew every kid on the block (apparently one neighborhood kid refused to go to kindergarten if I was not there…I never knew I had such power at the age of 5). We caught spiders and dragonflies, scooped up guppies and tadpoles from drains and fostered stray kittens and dogs. And I do feel a little sorry for my kids who get to go to beautiful parks but don’t get to enjoy being grubby and running wild with friends.

But I like to think that we carry that kampung spirit in our hearts. That there is enough of old Singapore in our new world. So this Jubilee weekend, my steak and ale pie, a quintessential British pub staple, has, just like our Singapore flag, 5 stars on it, to remind my family of our ideals of democracy, peace, progress, justice and equality for our nation. Happy 50th Birthday Singapore! 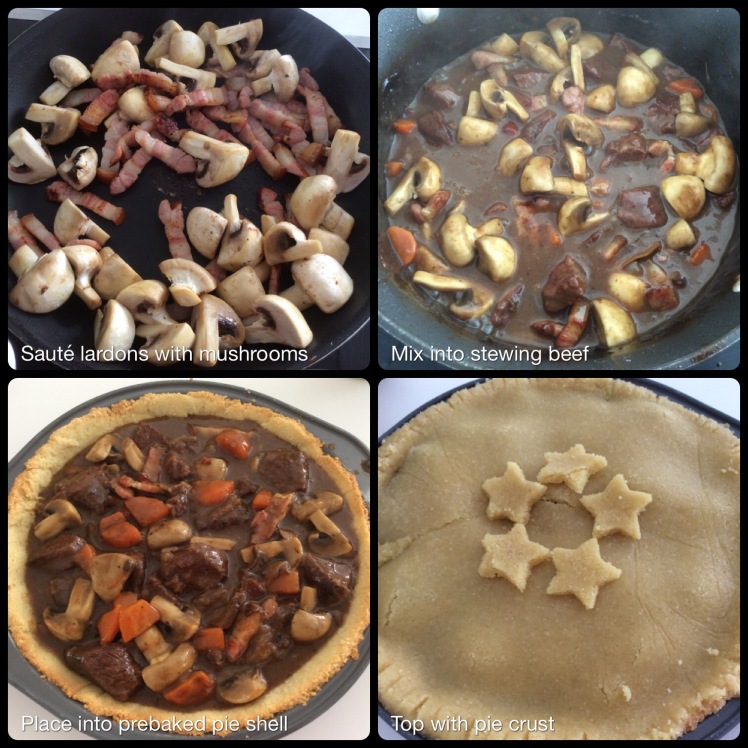